Buytrago, a former member of the men’s national beach volleyball team and bronze medalist at the 2019 Southeast Asian Games, refused to go down with his partner Salvador after losing the first set to the Tiger Spikers looking for three towers.

The NU pair fought back from a 5-8 deficit in the deciding third set, scoring five straight points for a 10-8 lead. UST were able to restore order as Dimaculangan’s block tied the game 11-all, but a service error from teammate Varga and a smash and block from Buytrago put the Bulldogs on match point, 14-11.

Dimaculangan saved a point for the Tiger Spikers only for Salvador to close out the thrilling game with a kill as the Bulldogs earned their first win after two games in UAAP beach volleyball’s opener comeback after three.

UST, which is aiming for its third straight championship, has started its title retention campaign on the wrong foot. Jaron Requinton, who recently won his second bronze medal at the SEA Games in Hanoi, Vietnam last week, was listed as the school’s third player and can be activated at any time during the tournament. 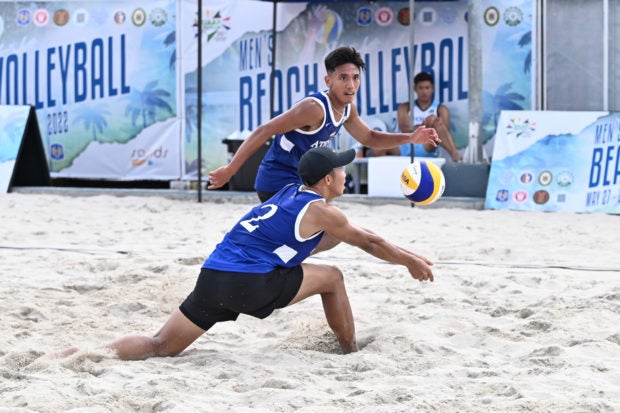 Meanwhile, Ateneo and La Salle took a 2-0 lead early in the tournament, the former making waves after a winless campaign in 2019.

Kampton and Maglinao of the Green Spikers also made enthusiastic UAAP debuts after upsetting NU and beating Daniel Nicolas and Louis Gamban of the University of the Philippines, 21-19, 21-11.

UP’s Gamban and Nicolas also shared their opening two matches after a 21-15, 21-11 win over Adamson in the morning session.

The action resumes at 9 a.m. Saturday with FEU-Adamson, UST-UP and Ateneo-De La Salle in the morning session, and NU-UP, FEU-De La Salle and UST-Ateneo in the afternoon from from 1 p.m.