Going into the NJSIAA Men’s Volleyball State Championship game on June 9, many had likely thought the Southern Regional was the favorite to win a seventh state crown. On paper, it certainly looked like that.

The Rams were undefeated, on a 33-game winning streak in which they had lost just two games the entire streak, and the teams that managed to lead Southern to three games in a game weren’t in the game. other side of the net inside. Southern Brunswick High School. Instead, it was defending champion Old Bridge, bringing with it a 25-7 record.

Pick up some old sports sayings – whether it’s “hard to beat a team three times” or “when it comes to the playoffs, it doesn’t matter what happened in the regular season” or that “It’s not over until it’s over”. Turns out all three were there.

“It’s always something that gets said – it’s hard to beat a team three times,” South head coach Eric Maxwell said after his Rams lost their one and only game of the season , 25-20, 23-25, 16-25, as the Knights won a fourth straight state title. “But, on the inside, it’s more like, ‘If we’re better than them, then we just have to go out and beat them again.’ They got better at the end of the season and they were hungry, we just didn’t do the job.

During the regular season, Southern swept Old Bridge twice, most recently just before the start of the state tournament – ​​the Rams won a tune-up game, 27-25, 25-17, on the 19th. may. title clash, marking the victory of the first match and the momentum clearly on his side in the middle of the second.

However, the Knights, who had lost to St. Joseph-Metuchen three times during the regular season before knocking out the top seed in the Central Jersey final, followed by a victory over Scotch Plains-Fanwood in state semifinals on June 7 after losing to the Raiders in the regular season, fought back. 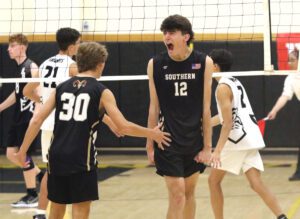 GET HYPED: Southern Region senior Nick DiMaria celebrates after scoring on a kill in Game 2 of the Rams’ 2-1 loss to Old Bridge in the NJSIAA State Championship game at South Brunswick High School.

After the Rams took a 13-8 lead on a Lucas Kean kill, a service error opened the door for Old Bridge, who added two more points before Kean temporarily slowed the Knights with another of his 14 kills, keeping Southern’s lead at three. points, 14-11. The next four runs went to Old Bridge, as junior hitter Blake Krapf had a pair of kills, scored on an ace and a block to build momentum.

“We were five and made a service error due to a timeout,” Maxwell recalled. “Instead of putting the ball on the ground – they felt a certain pressure there, at that time – and making them do something, we gave them the easiest side in the world. You just can’t do that in games like this.

The Rams and Knights went back and forth for the next eight points, and Southern regained the lead, 18-17, after senior Drew McNellis had one of his eight kills to tie Game 2 before an Old Bridge serve hit the net, but another service error tied the game again at 18-18.

McNellis slammed a ground ball to make it 19-19, before the Knights got their momentum going for good, taking a 21-19 lead when Massimo Roco scored consecutive runs. Roco delivered another kill to make it 23-20, but Kean and senior Gavin Bates dropped ground balls to make it 24-23. Old Bridge won the game when Southern’s double block attempt on a hit by Krapf bounced out of bounds.

“Between games we just said we worked hard all season to let it go,” Kean said. “We said we were going to win, but it didn’t happen.” 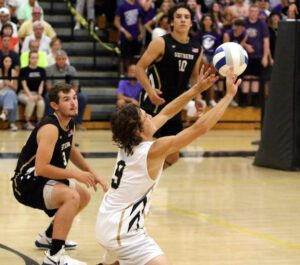 ARE YOU LOOKING?: Southern Region senior libero Finn Olcott sends a pass to the front row as classmates Nick Piserchia and Gavin Bates (10) look on in the second game of the 2-1 defeat of the Rams against Old Bridge in the state title contest on June 9.

The Rams started the game well, taking a 3-1 lead after senior Nick DiMaria hit a ground ball for a kill, Old Bridge hit the net in their next attacking set, then hit a ball for give Southern the initial lead. But that quickly faded and, at 5-5, the Knights simply took over. After Krapf went 7-5 with back-to-back aces, Old Bridge launched a 15-7 outburst to go up, 22-12 – a deficit the Rams hadn’t faced all season.

“We dropped in that third game and then gave up towards the end,” said Kean, who had four blocks as well as four digs. “It’s really our fault that we lost this match.”

An Old Bridge service error, a block from DiMaria and McNellis, and another block and solo kill from McNellis cut the lead to seven, 23-16, but the Knights put the exclamation mark on their Stellar post-season to become the premier program in state history. win four consecutive titles.

Bates finished with seven kills, while senior libero Finn Olcott – who delivered arguably the most exciting point of the match when his one-handed dive in game two managed to land in the back right corner for his sole kill of the season – finished with 10 digs and senior Matthew Rekuc had three kills. Sophomore setter Angelo Addiego had 31 assists and 11 digs to go with two blocks, and senior Nick Piserchia scored on an ace.

“We worked hard and were prepared, so it’s hard to figure out what approach to take this offseason,” said Maxwell, whose crew easily beat Fair Lawn, 25-10, 25-18, in the semi-finals on 7 June. “I don’t think we could have done much more to prepare for this. Every time we won a big game, these guys were in the gym and worked harder to improve. We just needed to perform better today when it really mattered. It was lucky to have this really amazing season, but it will stink forever.