There’s a similar theme among the county’s volleyball teams as Alamo, Magdalena and Socorro all work to mature youth rosters.

All three teams competed in the Magdalena tournament and their coaches were looking for players to take on leadership roles while looking for the right mix on the pitch for a strong set of starters and substitutes.

The Lady Warriors have started the season a little lackluster, and coach Christie Chavez isn’t as concerned about wins and losses as much as his team’s focus on the pitch.

“Coming into this tournament, I was focused on maintaining a positive attitude,” Chavez said. “Our girls often put each other and themselves down more than anything, which depresses the whole team. So that was my goal today: keep a positive attitude if we make a mistake, come back back and fix the mistake. And try to keep pushing for the win. You know, it’s tough with 25-minute games.

The pool game consisted of a 5-minute warm-up followed by a 25-minute match. The Lady Warriors are improving, especially in net blocking, where movements have become more thoughtful than they react to situations.

“We played a lot better. They were playing well together,” Chavez said. “Communication is still one of our biggest things.” 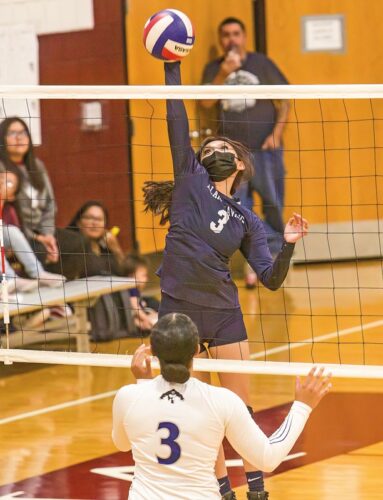 Coach Danielle Gordon is in her second season at the helm of the Lady Cougars, and after winning bronze last season, she was looking to push her team to new heights. At the same time, Alamo strives not to be one-dimensional.

“Our main goal is to work together. Sharing while we’re on the pitch, having a good time while we use our skills and also doing better than we did last year,” Gordon said. “We are playing at a bit higher level and we have worked hard for that.”

Service is one area where Gordon would like to see immediate improvement.

“We need more work on our services and then we also need to focus on communication and transition,” Gordon said. 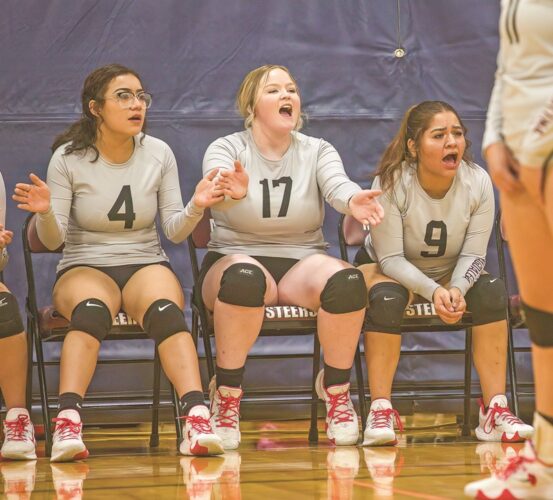 Magdalena’s bench was excellent for encouraging players on the pitch.

Coach Sue Ann Conley likes to use tournaments to discover the character of her team. The fast-paced play and multiple opponents provide the perfect opportunity to find out.

“We are completely new compared to where we were last year. Every year is different. And the team dynamic is always different,” Conley said. “You have to determine who should do what and who should lead. You must determine your team each year.

As the host school, there is the added burden of assisting line call plays for the players, and the athletes are also called upon to perform other duties.

“Right now our goal is to improve with every game. We are using this tournament as a springboard to prepare for the rest of the season,” Conley said. “We have to play regularly and work to improve every game.”