NETHERLANDS – The Netherlands volleyball team is just over a week away from the start of the season, and head coach Allie Crommett can’t wait to see how his talented group reacts to the competition .

The team started training camp this week and play in a scrimmage on August 5.

“I’m excited,” Crommett said. “Just after last year’s season and the success we had, I feel like we have good expectations. I know we are young, but I feel like we are more competent than we have been in the past.

Last year’s team was undersized and relied on skill and determination to go 26-7, 9-3 in district play.

“We’re a lot bigger this year,” Crommett said. “I just feel like our expectations are high because of the skill level we have.”

They have both been starters for four years with experience in defense and attack.

Audrey Johnson is a senior in her third year.

“She was more vocal than Kamren was. She’s more comfortable moving people around and letting them know she’s going to do this or that to them. I think that helped. 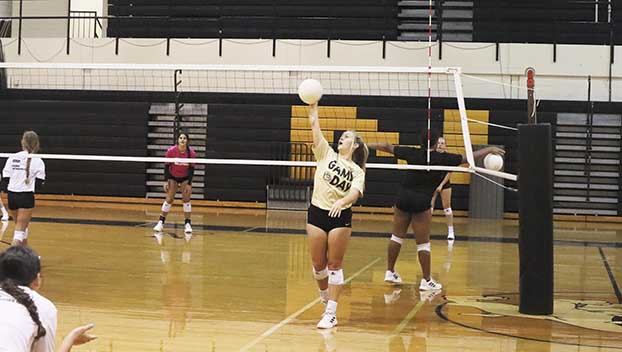 Audrey Johnson will be the setter for the Netherlands this season. (Chris Moore/The News)

“I think we’ve gotten better, even over the last few days,” she said. “I think we will be even better once we start to get back to it. I expect us to be very successful.

The coach is ready to see two sophomores take on bigger roles this season.

“For freshmen, the pace of the game from eighth year in college is so different, there was a learning curve,” Crommett said. “Reagan played defense last year and she’s a very good waitress. We relied on her a lot last year to serve when we needed her. This year she will also step in as a setter. She makes a great job reading across the court. She’s great at telling our hitters where to hit and where the runs are. Arnold is the tallest kid on our team at 5’11” and is a great presence on the outside. She is probably the most improved player on the team.

The Bulldogs have lost some of their leadership from last season, but Whitehead said she and her teammates have stepped up to fill the void.

“It’s a bigger role,” she said. “It’s different because I was with the kids we lost for three years.”

Crommett wants the team to bring home a district championship.

The Nederland District opponents are similar to last year, except for a few teams mixed in with the new roster.

“I think this team has the ability to do that,” she said. “We can’t ride the roller coaster of showing up against one team and not the next. We can’t avoid competitors like Barbers Hill and Crosby.

The Netherlands’ first game is against Hargrave at home on August 9.

The Bulldogs starting district will play Sept. 23 against Baytown Lee on the road.